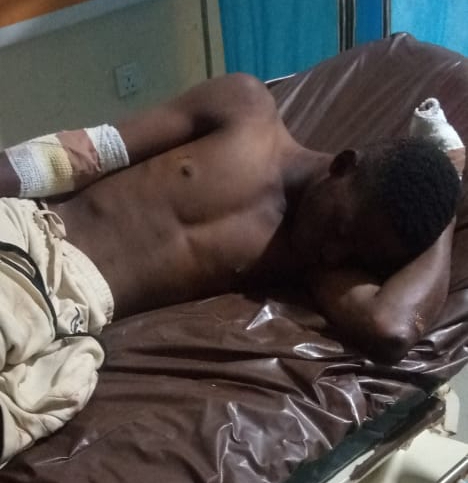 The True Position Of The Attack In Idanre: Omotadowa Too Refined To Attack Opponent

It came as a rude shock to Barr. Smart Adeuyi Omotadowa Campaign Organization the story circulating around the town and in some Newspapers and online news platform about the mayhem caused by drivers union (NURTW) who are supporters of one Tosin Ogunlowo in Idanre. The blackmail was too much even while Omotadowa was busy taking care of the victims.

You will recall that man inhumanity was witnessed at a high pedigree on Wednesday, 11th May, 2022 when the drivers’ union (NURTW) in Idanre Local Government unleashed terror attack on Okada union in a broad daylight.

An eye witness who prefered to be anonymous and was present at the scene informed us that the whole saga engulfed when one Mrs. Tosin Ogunlowo who is contesting for MHA, Idanre state constituency came in her convoy after she might have gone to submit her nomination and expression of interest forms at the APC Secretariat in Akure, and some boys alighted from one of the cars in her convey and started attacking the Okada union boys at Starlight junction at Alade-Idanre.

Another eyewitness at Ojadale area in Odode-Idanre also narrated same story of how same thugs in the convey of the said aspirant attacked the ACCOMORAN boys at Ojadale junction. It is no longer news in Idanre that Okada union and Drivers’ union have shared boundaries in their support for the main Aspirants of the APC ahead of their primaries.

Before these attacks, an informant has called the attention of Smart Adeuyi Omotadowa Campaign Organization (SAOCO) to an unholy gathering of unknown faces at Italorun town, along Akure-Idanre road, who eventually joined the convoy of this said aspirant.

The attack was a gory sight to behold as two of the Okada guys was macheted beyond redemption and others were shot on their legs, the aftermath results of this led to four of the guy’s left hand fingers cut off.

And according to the report, all the four fingers were taken away and buried.

Smart Omotadowa as a person is too refined to engage any political thug to attack another aspirant. Idanre people knew him to be a gentle and coolheaded being. He has been busy wooing party Delegates and winning their hearts to himself.

The Smart Adeuyi Omotadowa Campaign Organization therefore challenged the said Aspirant, Tosin Ogunlowo alongside Idanre police division to follow us on a visit to the injured descendants of Idanre Kingdom and ascertain who among them is her follower or fans, because we believe we will not attack ourselves.

We also use this medium to call on the Inspector General of Police and Ondo Police Commissioner to investigate this barbaric and uncivilised act. There must be justice for the man who lost his fingers and those who are critically injured by those thugs.

We call on our Leaders to come to our aid, this intra party crisis should be nipped in the bud before the major election, as this is not a do or die politics.