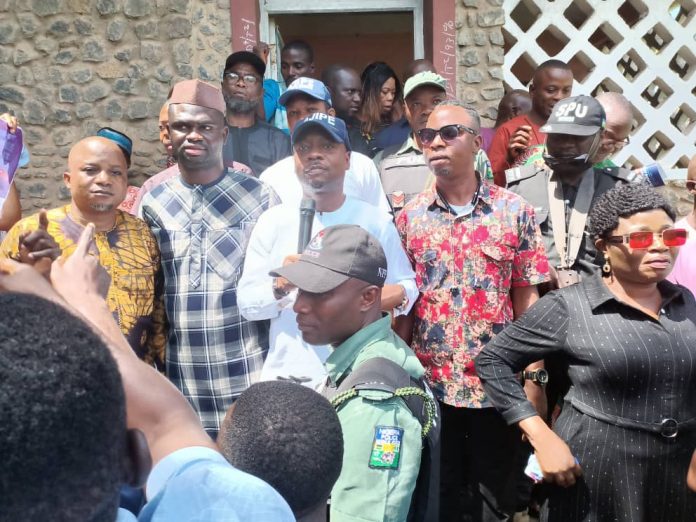 While meeting the party LGA executives, Ajipe called on the people to join hands and be ready to make sacrifices in their decisions to elect national assembly members representing the Ondo North district in the coming elections.

He urged the delegates and party members in Akoko north west local govt to choose wisely and consider the future of the younger generations.

At Okeagbe, the headquarters of Akoko North West Local Govt Area, he urged the people to make wise decisions, saying that the next election will determine whether the people are willing to free themselves or continue in perpetual slavery which has lasted 12 years.

Chief Ajipe, who appreciated the efforts of the member representing Akoko Northwest/ Akoko Northeast federal constituency in the House of Reps, Bunmi Tunji-Ojo, maintained that there is a need for a better representation in the senate to create a better synergy with BTO’s sterling performance.

While lamenting the level of insecurity, lack of infrastructure and sickening poverty among the people, Ajipe said his antecedents and motivation to impact to positively on the lives of the people make him the best among the aspirants.

“If you look round, it is for anyone to know that I am the most qualified of all the aspirants. I’ve been the only consistent person among the lot. I have never left the Progressives fold since I entered politics.

“My contributions to the economic development of the state is second to none. How many of them have their businesses in Ondo State? These are truths that can be verified any time,” Ajipe said.
Addressing the party executive at Akoko North East Local Government Area, Ajipe said it is time for the people to make better decisions that will make their lives better.
While thanking the people for the warm reception, the senatorial hopeful said he was spurred to enter the race because of the need to put in place sustainable basic amenities, such as good road networks, potable water, basic health care services, affordable primary and secondary education and grants to alleviate the suffering of the people.

“I am pained any time I see little children drop out of school because their parents cannot pay their school fees. But unfortunately that is what is happening because of the lackadaisical attitude of the man that we have elected in the last 12 years. I believe that things can be better than what we have gotten in the last 12 years.”

The convener of Ibi giga also Stressed the need to cater for the political family, which according to him, are languishing in abject poverty as a result of the neglect by those who are supposed to be their rallying points.

Ajipe, however promised to deliver on all his electoral promises if he is given the opportunity to represent Ondo north at the Senate.

Speaking ealier, the Director General of the Ajipe Campaign Organization, Barrister Tolu Babaleye, said it is time to put an end to what he described as “12 years of stagnation in Ondo north”.

Babaleye, a chieftain of APC and community leader, urged the people to consider the future of Akoko and that of their children in any decision they will take when choosing the party’s flag bearer in the 2023 elections.

He said he will ensure that all campaign promises by Ajipe are fulfilled, stating that Ajipe has listening ears and has a penchant for good living and development.

Babaleye called on the party members and delegates to put a stop to the unproductive 12 years of Senator Boroffice which he said is enough to change the fortunes of the people of the district for good.

He challenged the incumbent senator to mention developmental projects he had embarked upon and completed in the last 12 years?

In their responses, Chairman and Vice Chairman of APC in Akoko Northwest local government area, both thanked Ajipe for the visit and promised to work for his victory at the polls.

The Vice chairman, Akeem Amao, advised Ajipe to ensure that he fulfils his campaign promises and distinguish himself from other politicians who always have pleasure in telling lies to the people.

On his part, the Chairman Kehinde Obanla aka àjàpáàrà says the district needs the services of a young, vibrant and agile person like Ajipe to represent Ondo North Senatorial District.

He said Ajipe is a cheerful giver whose attributes have been attested to by many people and will have very positive impacts on the lives of the people.

Addressing the people of Akoko northeast local government in Ikare Akoko, the local government party chairman, Alh. Mumini said the time for true change has come in Ondo North and all concerned indigenes must be ready to enthrone a senator with a true quest for the development of the zone.

Mumini, who said Ondo North senatorial district is lagging behind in all ramifications, wants a quick response to the agitation of the people which include, quality representation, lobbying for establishment of infrastructural and human development.

Still on the campaign tour, Chief Alex Ajipe, on Wednesday visited Oka Akoko, the headquarters of Akoko Southwest, where he urged the delegates to be bold in their decisions and avoid selling themselves and the future of their children to moneybags who are desperate to get the party’s ticket at all cost.

He said moneybags would only use them for their selfish interest.

Ajipe charged the delegates to be bold and courageous to choose who to represent them during the primaries.

According to him, the people of the senatorial district have been denied dividend of democracy for long as a result of poor representation, promising to change the narrative if given the chance.

He said his major goal is to achieve good governance through improved healthcare, education, security and empowerment of the people and industrialization.

“I am here today to seek for your votes so I can represent you at the red chamber in Abuja. You all know me, I belong here, you know my antecedent, you know my contribution to the party. You are aware of over 350m dollars of investments that brought to this state. This is what I want to do for our people if given the opportunity.

“Enough of bad representation. We can’t continue like this after 12 years of clueless representation without achieving anything. My passion is solely driven by the progress and prosperity of the indigenes of Ondo state and Nigerians as a whole.

“I want to see how we continue to improve the various sectors, including education, health and agriculture and investment. This is what I have done without holding any political appointment. So believe if I get there, I will do better.

“I charge you to be bold and courageous . If we fail to get it done this time around, we may not get it back again. This is our time, let’s join hands to take our people out of poverty, joblessness and insecurity.

“Let me advise all the delegates here against voting with parochial
sentiment and financial gains. The destiny of APC lies in your hands at this particular period and its is expected of you to do what is right for the future of the party and our people,” he said

Ajipe, who said he is not a stranger to selfless service, further noted that he has come to lead and serve tremendously well with what God has given him, stressing that it is high time to change the narratives.

Under his watch, Ajipe further assured the people that he will use his leadership to re-engineer the socio-economic realities of the people and give them the opportunity to thrive as they truly deserve.

He said he will use his proven and verifiable record to birth positive change and ensure economic wealth and prosperity for the people.

Also speaking at the event, the director general of Ajipe Campaign Organization Bar. Tolu Babaleye, express his confidence in Ajipe, saying if the people of the district can give him chance, they will never regret it.

Babaleye said Ajipe has all the right qualities necessary as a true progressive to advance the cause of his people by harnessing and utilizing all resources for the collective gains of all the people in the senatorial district.

According to him, Ajipe’s representation will among other things, bridge the gap between the old and the new, more so, at a time when the youths are agitating for youthful representation in governance.

“Judging from his achievements under the present administration in Ondo State, Chief Ajipe has left no one in doubt of his ability to birth the desired change having served meritoriously as the backbone of Ondo State industrial Revolution, leading to the birth of a new economic reality for the people. This feat, he will no doubt replicate if given the opportunity”

“There is therefore no better time to change the narratives through sustainable leadership and qualitative representation and as 2023 General Elections draws near, it is time to right the wrongs by making history with a man who has continued to set the pace in all ways possible,” Babaleye stated.

In his remarks, The vice chairman of APC in Akoko South West local government Hon. Olasehinde Theophilus, said it’s time for genuine change and that the people of the local government have been under suffering and smiling for long.

Olasehinde said what the people want is good representation, empowerment and job creations from any candidate that want to represent them.

He praised Ajipe for his achievements.

“You have written your name in gold. We know your anticident and what you have done for the people even without holding any political appointment. We are aware of the number of youths you gave cars to during the second term election of the governor.

“We know how you paid students’ school fees and empowerment of our youths. We will do our best to support you in this local government,” he said.

At the program were all the local government executives, counselors and other party members.