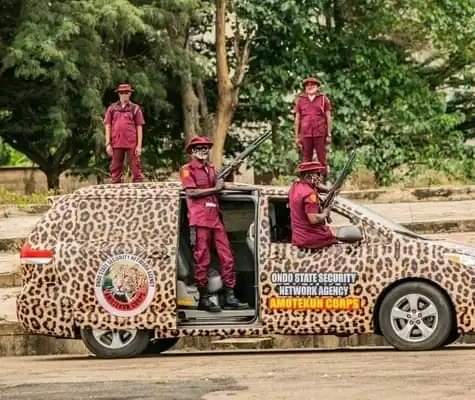 Operatives of the Ondo State Security Network “Amotekun Corps” and Office of the Governor’s Special Adviser on Security Matter have received with dismay and sadness the death news of a Student of the Rufus Giwa Polytechnic, Owo allegedly shot by one of the Amotekun men in Owo during an operation.

It is necessary for the Corps to explain to the public what transpired few days ago that led to the unfortunate death of the student.

In its avowed determination to ensure that Ondo State is rid of criminal elements, the state Amotekun Corps is investigating the case of a syndicate that specializes in attacking Okada riders with dangerous weapons and dispossess them of their motorcycles in the process.

Luck however ran out of one of the syndicates who was given a hot chase into a building in Owo by men of the Amotekun Corps where other members of the gang were met 15 men in the building, 7 out of the men stacked naked in side the room filled with smoke. And four Okadas were also fund in side the bedroom.

After introducing themselves to the men, the men struggled disarm the operative who alarm attracted the other two outside.

In an attempt to apprehend the suspect, they swung on men of the Corps, trying to disarm them and in the course of the struggle, one of their riffles triggered off and hit one of the suspect and an Amotekun officer.

At that instance non of them told Amotekun officers that they were students.

According to the State Commander of the Amotekun Corps, Akogun Adetunji Adeleye, his men eventually overpowered the suspects, arrested and took them to the Corps Office in Owo where they were detained while investigation was continues.

‘He was released to him on health ground, promising to return him to the corps custody so as to continue investigation

“The suspect left our facility on same day, 11 days after the incident to get first aid treatment with the promise to return in continuation of the investigation.

Surprisingly, the news of the dead injured suspect’s filtered yesterday after 11 days the incident occurred..

We sincerely register our Condolences to the family and friends of the deceased while we continue with our indepth and thorough investigation to the real cause of his death.

The Ondo State Amotekun Corps, however wishes to assure the public that it will work with stakeholders including NANS, the Polytechnic Community and family of the victim to ensure that justice is timely served.

The Corps promised that it would not relent in its avowed determination to protect the residents of Ondo State in collaboration with other security agencies and sanitize the state of criminal elements terrorizing the state.