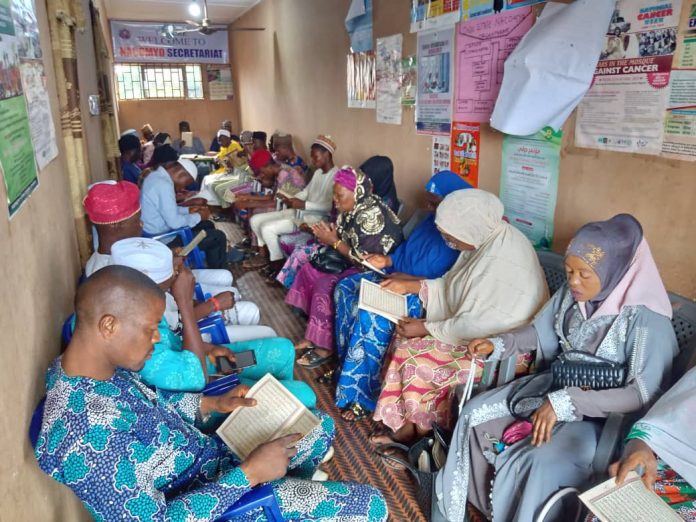 MMPN Chairman, Issa Olatunji and Secretary, Fatima Muraina in a statement on Sunday urged Nigerians to be the “very change we desire to see in our beloved country.”

The statement read below:

The Islamic New Year, Hijrah 1444 is here and in line with its historical antecedents, the time has come for self evaluation, soul searching and stock – taking be it as individuals, families, groups or entire society.

Hijrah among other numerous lessons for a country in dire need of moral rebirth and sociopolitical overhauling represents four key elements namely:
1* Sincerity Of Purpose
2* Undiluted Perseverance Amidst Uncertainties
3*Humanity First and
4* Unity In Diversity

Sincerity of purpose could not be more elucidated elsewhere than the story of migration from Makkah to Madinah with the noble prophet of Islam as the arrowhead of servant leadership while his followers too reciprocated by trusting him without any cause to doubt his truthfulness.

As we mark Hijrah 1444, it should be borne in mind that Nigeria must retrace its steps to the era when both the leaders and the led have total trust, mutual understanding and empathy for each other.

Undiluted perseverance is needed at this point in time more than ever before in our national history with the myriads of challenges manifested in insecurity, widespread corruption, economic upheavals and political desperado. Just like the emigrants abandoned their place of birth, loved ones and what could generally be seen as a “familiar terrain” for the unknown environment in the scorching heat of the desert, all Nigerian citizens must as a matter urgency be ready to forsake our individual and collective comfort zones to redirect the ship of the nation from poverty to prosperity, impunity to probity, greediness to selflessness and an enclave of anything goes to a haven of everybody’s dream. We must note that there is no shortcut to tangible breakthrough and one cannot put something on nothing. Dignity of labour should not only be preached but be promoted and encouraged by concerned authorities so as for millions of Nigerians to have a firm belief that a brand, new nation is possible.

Humanity first as displayed by the Ansar (Helpers) who hosted the Muhajiru’un (emigrants) with virtually nothing having abandoned everything they laboured for over the previous years back in their native Makkah should be replicated in a country where indigenes/settlers débâcle, north/south dichotomy and old folks  versus young generation faceoff are still rearing their ugly heads especially in the build up to a general election which more often than not has been creating an all movement; no motion situation for our country of birth.

Finally, unity in diversity otherwise known as multiculturalism which made it possible for Muslims, Christians, Jews and Pagans to coexist for the evolvement of an economically flourishing and politically stable city – state in Madinah could not be far – fetched if and only if we are ready to jettison religious fanaticism, ethnic bigotry and other forms of intolerance which pervade our national atmosphere today after sixty years of independence.

Religious, traditional and political leaders as well as other opinion moulders must as a matter of urgency recognise the dangers inherent in fanning the embers of discord which can only spell doom for the most populous black nation on earth.

As we approach another election year, it is incumbent we steer away from utterances, behaviours and endeavours that promote segregation but rather understand the fact that the popular maxim  “united we stand; divided we fall” is not a myth.

Nations like Bosnia Herzegovina, Sudan, Lebanon and lately Ethiopia have tasted the bitter pills of war which arose from ethnic or sectarian differences.

Nigeria is endowed with the human and material resources and the path to progress or perdition lies ahead of us – like the story of hijrah; the choice is our to make.

Meanwhile, Nigerians irrespective of their religious, ethnic, cultural or political persuasion have been told to put national interest above any other consideration as the 2023 general election if the nation is to get it right in its search for a leader who will take the nation out of the woods.

The chief missioner, Organisation of Muslim Unity (O.M.U), Ustaz Muhammadul Awwal Gumi while speaking at a special prayer session to usher in a month long series of activities marking the new Islamic lunar year 1444 After Hijrah cautioned the electorate against basing their decision at the polls on parochial sentiment.

While observing that security of lives and property is the most important responsibility of government, the Islamic scholar linked the challenge of insecurity to relegating the consciousness of God to the background in both private and public spheres even as he posited it is high Nigerians retraced their steps back to the Creator.

Gumi said Nigerians must never at any point lose hope in the efficacy of prayer as only God can touch the hearts of all and sundry to do the needful towards rewriting the history of the nation.

For the state coordinator, National Council of Muslim Youths Organisation (NACOMYO), Alhaji Yekeen Alli, the beginning of the new Hijrah year should be seen as a turning point to raise the bar of patriotism in Nigeria at a time everyone seems to be pursuing selfish interest at the expense of collective benefits of entire society.

According to the former ameerah, federation of Muslim women associations in Nigeria FOMWAN, Alhaja Rafat Momoh and the Iya Kewu of Akure Muslim community, Alhaja Idayat Jimoh, the 2023 general election should be seen as another golden opportunity for Nigerian women to stake their claim in national politics with their numerical strength through active engagement of candidates across all political parties in a give and take negotiations.

Faithful at the prayer session which featured recitation of entire holy Qur’an urged political gladiators to eschew violence in its entirety just as they urged the independent national electoral commission INEC to extend the voters registration exercise so as not to disenfranchise eligible citizens.