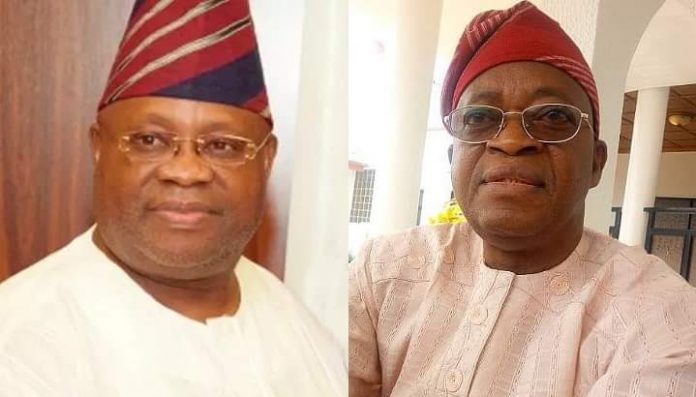 The Tribunal is a legal body which is saddled with the responsibility of receiving complaints from the just concluded elections from both the state level and the federal level. It is not a news anymore in Osun State that after the July 16th, 2022 governorship election in the state, that APC and governor Oyetola proceeded to the Tribunal to have a cover against the received shame/defeat during the governorship election where he had sought re-election.

The People of Osun State voted APC/Oyetola administration out completely with a wide margin which was beyond manipulation and political day light robbery like it happened in year 2018. APC and Oyetola claimed that INEC and PDP rigged the election in favour of governor elect, Senator Ademola Adeleke. They claimed that BVAS used were manipulated, that there were massive over voting in all the local government areas except Boripe local government where governor Oyetola came from and many other allegations levelled against PDP and INEC.

Critically looking at the case taken to Tribunal, immediately after the election, President Muhammadu Buhari congratulated governor elect, Senator Ademola Adeleke. Secondly, BVAS used by INEC cannot be manipulated as accreditation could not be done manually. Thirdly, how can Senator Ademola Adeleke and the Peoples Democratic Party manipulate election in all the local government except Boripe local government when APC is in government and power?

Before the election, it was glaring that APC/Oyetola led administration were rejected by the people, including the Civil Servants in the state. No promotion for the Civil Servants. Only promotion exercise conducted provoked them as increment in the salary was ridiculous. No employment for the youths except the job that children of the politicians cannot do, they employed graduate to be cleaning and cutting the bush under the devilish scheme called OYES.

The high cost of goods in the market, has contributed to the pain of the masses/electorate. The people had no choice than to vote APC and its government out. The ten thousand naira shared by the APC couldn’t secure vote for them, as the electorate collected their money and taught them a lesson they will never forget.

The Peoples Democratic Party is not in control both at the state and federal level, PDP have no control over INEC nor its staff but APC. If APC at the state level could be alleging INEC and PDP of manipulation/malpractice, the masses/electorates can now see that this is an attempt to waste state funds.

Another question for APC/Oyetolas government to think of is, did their party agents sign election results from the polling units? If the election was manipulated or rigged, why did they sign and collected the results without issues from the polling units until INEC declared Senator Ademola Adeleke as governor elect
?
The candid advise for APC/governor Oyetolas administration is to accept defeat and see politics as a game which one must win and the other accept the defeat. They should remember that there is no permanent enemy in politics. They should retrieve the case at the Tribunal and not get shamed the second time with the outcome of the Tribunal.