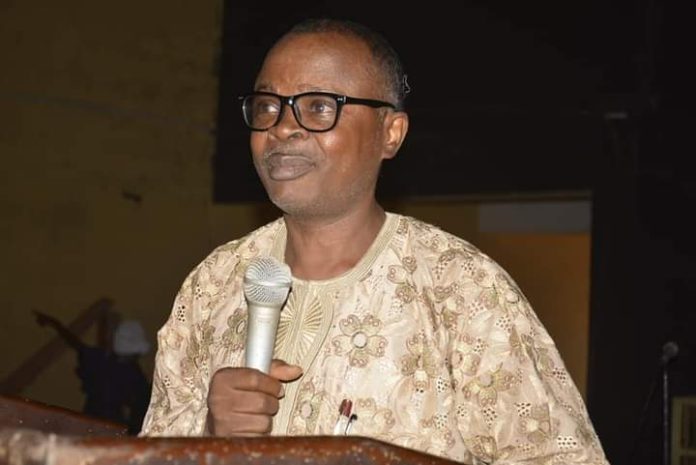 The Acting Provost, Adeyemi College of Education (ACE) Ondo, Dr. Ajigbade Ikuejube, has assured staff, students and members of Ondo community, that the Federal Government is fully committed to the actualisation of the institution to a University of Education.

Dr. Ikuejube gave the assurance in a goodwill message delivered at the 2023 New Year Prayer meeting, which held on Tuesday 3 January 2023 in the institution.

While commending all stakeholders including staff, students and indigenes of Ondo community for their resilience towards the actualisation of the University dream, the College Chief Executive, expressed optimism that with the support of God Almighty, the University would come in no distant time.

Stressing the need for staff of the college to have trust in him and his management team, the Acting Provost stated that the development would boost mutual understanding and enhance development of the institution.

He gave the assurance that the Management under his leadership would not disappoint them, just as he appealed to staff of the college to shun rumour mongering and spreading of false information, which he said could breed mistrust and cause disaffection among workers in the college.

The Acting Provost identiﬁed paucity of fund as the greatest challenge currently facing the institution, noting that the problem was responsible for non-payment of productivity allowance and provision of palliative usually given to staff of the institution during Christmas season.

He appealed for more understanding and cooperation, stating that his administration is working round the clock to proffer solutions to the problem.

While thanking the Federal Government for various life changing projects currently being executed in the college, including the soon to be commissioned Skills Acquisition Centre, the College Chief Executive, noted that when fully completed, the projects would add values to the institution, and change its outlook in readiness for its University take-off.

Dr. Ajigbade used the occasion to highlight efforts being made by his administration to advance development of the college, within the few months of ascension to power, to include the planned construction of a new gate and a double lane access road, building of Students Recreational Centre, as well as renovation of staff quarters, stating that upon completion the projects, would boost welfare of staff and enhance beauty of the college.

The Acting Provost commended staff of the institution for attending the prayer meeting, while appealing to them not to relent in seeking God’s intervention in addressing various challenges facing the institution.

He prayed that the good Lord would make the year 2023 a successful one for everyone in the college.

Earlier in a sermon delivered on the occasion by a clergyman, Pastor Ambrose Akinborewa from the Redeemed Christian Church of God (RCCG) Ondo, he harped on the need for people to obey God’s instructions.

Speaking on: “ 2023 – A Year of Great Change”, the religious leader stated that people would only experience great change when they remain on the side of God, when faced with great challenges.
Alluding to the story of Job in the Holy Bible and citing various portions of the scripture to buttress his points in Job chapter 1 v8; Psalm 34 v7; Luke chapter 37 as well Philippians 2v4, Pastor Akinborewa advised the congregation on the need for them to be conscious of the fact that they are liable to be confronted with various challenges like Job, he, however, urged them to emulate his ( Job’s) attitude to God by refusing to surrender, when faced with unpleasant situation, stating that God has the capacity to take care of their problems, by restoring whatever they might have lost during their trying periods.

On how to achieve positive change in the year 2023, the religious leader advised the congregation to learn how to forgive those who offends them, pray for other people, rejoice with people who attain progress, do something to celebrate God, show respect to God and make determination to follow Christ.

Similarly, in another new year prayer session held simultaneously at the College Mosque, the Chief Imam of Ondo kingdom, Alhaji Bashir Alimi, commended Management and leadership of the college for impacting positively on the students, stating that the training and discipline given to the students have differentiated the college as one of the best amongst its peers in the country.

The highly revered Islamic leader also expressed happiness about religious harmony, tolerance and understanding among various religious groups in the college noting that the development has brought peace to the institution. He prayed to the Almighty Allah to move the College to higher level and grant the long awaited dream of transforming the institution to University of Education.

Also in his short remarks, the leader of the College Moslem community, Dr. Rasheed Oloyede thanked Management of the College for coming for the prayer.

He, however, used the occasion to solicit for assistance to the Muslim community while pledging maximum support of his members to the growth and development of the institution.

The two religious events which was held by Christians and Muslim faithful at the Olusegun Obasanjo Auditorium and College Mosque respectively featured exhortations from the Holy Bible and citations from the Holy Quran as well as offering of prayers for Management of the College, its staff and students, Ondo community and Nigeria nation at large.

The programme was attended by many important personalities including Principal oﬃcers of the College which include the Acting Provost, Dr. Gbade Ikuejube; Registrar, Mrs. Oluﬁsayo Fakorede; Bursar, Mr Ganiyu Abdul and Librarian, Mr Azino Akpokuriere.

Also in attendance were several Islamic and Christians religious leaders, Muslim faithful and their Christians counterparts from within and outside the College, staff and students of the institution to mention but a few.