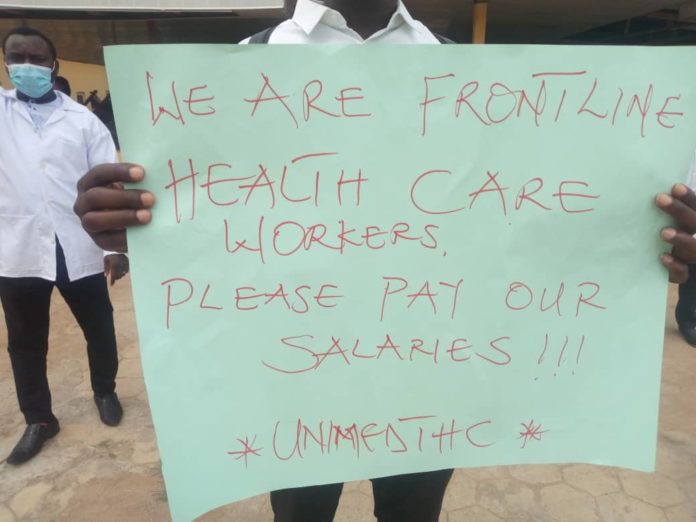 The doctors under the aegis of the National Association of Government General Medical and Dental Practitioners (NAGGMDP) Ondo State Branch, an affiliate of the Nigerian Medical Association (NMA), issued the ultimatum after an Emergency State Executive Council (SEC) meeting held Wednesday.

Chairman of NAGGMDP, Dr. Aina Oluwafemi, who read the communique issued after the meeting said the state government failed to implement payment of 50% of Basic salary as special COVID-19 hazard allowance for all health workers.

Dr. Oluwafemi said what they got was 2.5% deducted from their consolidated basic salary without explanation.

Oluwafemi said doctors were disappointed, perplexed and in distraught that the State Government could subject them to ridicule and public embarrassment.

He accused the Ondo State Government of refusal to implement consequential adjustment of increment in minimum wage to doctors and other health workers.

Dr. Oluwafemi said failure to meet their demands within 14 days would make them revert to Congress and any decision reached would be binding on the executives.

But Ondo Commissioner for Information and Orientation, Donald Ojogo, said all issues raised by the doctors were being looked into.

“The sector, no doubt, is a very critical one and Mr Governor has ways expressed his appreciation of their services. If there issues that require attention, Government will not sigh away from such. The responsibilities are mutual and inclusive.” (The Nation)