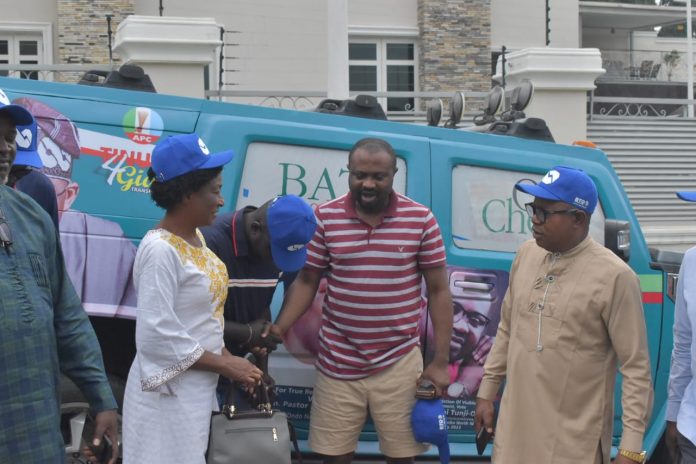 A Political leader in Akoko North West Local Government Area of Ondo State, Mr Segun Akeju, has donated a campaign vehicle in support of the re-election of Rep. Olubunmi Tunji-Ojo.

Tunji-Ojo is the Federal Lawmaker representing Akoko North East/North West Federal Constituency, who scored 115 votes to secure the ticket of the All Progressives Congress (APC) to contest the 2023 general election on the platform of the party.

While preventing the car to the legislator in Abuja, Mr. Akeju, popularly called Mr Pillar, said he was impressed with the performance of BTO in the last few years and has taken it upon himself to ensure his re-election.

He said, “It’s amazing to see a young man make such a great impact within a short period of time. This gesture is not about one person, it’s about voices of the good people of our local government and Federal Constituency.”

Responding, BTO noted that the donor has impressed him beyond measures and would be encouraged the more to continue to serve the people.

“I thank God that we are getting good feedbacks from our people. Akoko people generally are not Ingrates. This is an encouragement that when you are good to the people, they will also be good to you. I appreciate Mr Akeju for providing this means of mobility to support the campaign.”

He promised that he would ensure that the constituency benefits more on the dividends of democracy.